Day 25:  My friends Nicole and Zishan were at my house when I made this robot, so I had their opinions and feedback influencing the appearance of this little guy.  I think he turned out interesting but he's not quite the robot I've been dreaming about.  He looks more like a baby bug to me.  So although I dressed him up with a bow tie and cummerbund thinking there might be a wedding in our future, I'm going to have to disappoint him.  He was fun to make and because I had all kinds of things strewn about the house, I wasn't too suprised at one point to look up and see Mazi wrapping ribbons around Nicole.  Nicole started to look like an 80's punk rock mummy. Then Zishan got involved and started adding other things like bamboo skewers and egg cartons.  The results were a little wierd and scary, but I've never laughed so hard in my life!  Since decorating Nicole was part of the atmosphere into which this robot was created, I'll include some pictures of that too. 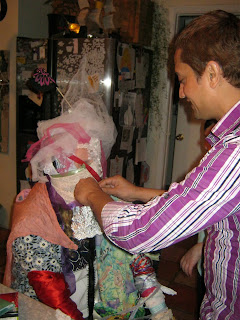 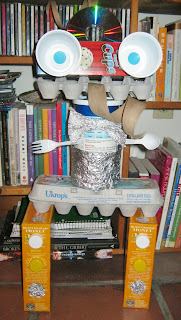 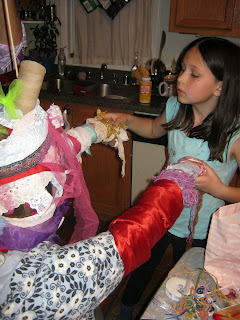 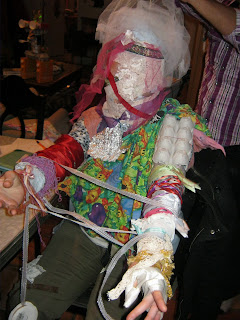 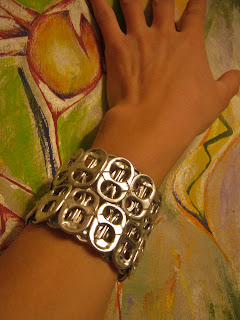 Day 26:  I have been making pop top bracelets for a while, but wanted to make a fatter version than the kind I had been making.  I ended up just connecting two together.  Although it was simple and not as inventive as some of my other days projects, I am happy with the results.  Sometimes all it takes is a small change to something I've tried before to come up with something exciting.  It feels more bold and dramatic than the other version and I have been wearing it ever since.  I also like the imprints it leaves on my skin.
Posted by Ren Geertsen at 9:42 AM