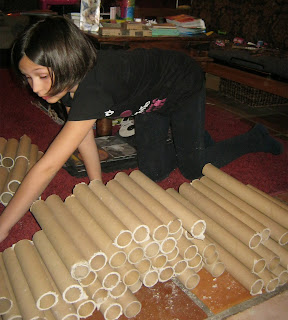 Day 34:  I was given about 25 sturdy cardboard tubes.  They had been used as the center piece for rugs to be rolled around.  I had no idea what I would do with them when I was given them, but was excited about seeing what I could come up with.  I thought at first I would do some sort of sculptural wall hanging, and decided that the first step would be to saw them into variously sized pieces.  As I was sawing them, I put them in a pile on the floor.  As it grew and I saw this heap of cardboard tubes, I couldn't help but think, "This is crazy! What the heck am I doing?"  Mazi started playing with them and organizing them into piles of different sizes, and from her creating these little structures, I came up with the idea to glue them into a table.  It took more glue than you can imagine.  I started with wood glue, used up my entire bottle of that, finished off a bottle of Elmer's glue, used a bit of Gorilla glue (which didn't dry fast enough for me), and then went out and bought some tacky glue to finish it off.  It was worth all that glue and more.  It resembles a wasp nest and is also somewhat industrial looking.  I love having it in my house, AND it replaced an ulgy black TV cart with wheels (which I just dropped off at the thrift store this morning). 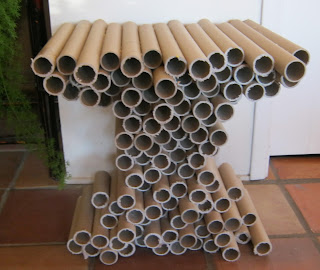 Day 35:  I made a bracelet out of rectangles cut from potato chip bags and candy wrappers.
The idea for this project came from Sara Basehart who found instructions for it on ehow.com.  Thanks Sara!
I've been saving bags for months now because I am planning on making a purse out of them.  The bracelet was made from the pieces that were left over from cutting out the pieces for the purse (leaving almost no scraps!)  I'm happy with how it turned out, but I think it would be more appealing if I made it thicker by attaching another round of woven wrappers to this one. 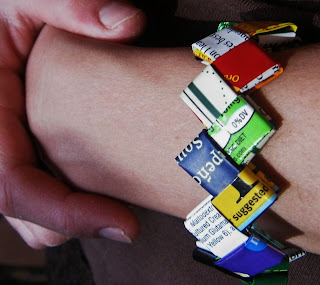