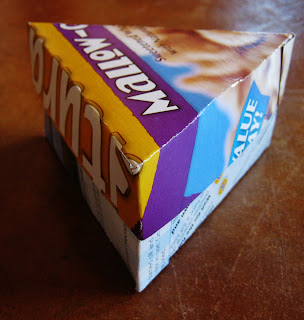 Day 38:  I used a Mallow-Oats cereal box to create a triangular shaped gift box.  I've always loved creating geometric shapes (which must be why I like doing the modular origami so much).  It is fun for me to figure out the sizes and shapes of the sides to make it all come together.  I'd like to make a hexagon shaped box at some point, but would really love it to be made from the type of cereal box that I never have around, like Fruity Pepples or Coco Puffs (just to honor my crazy childhood diet).  I wonder if anyone I know buys the stuff? 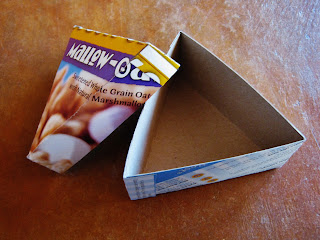 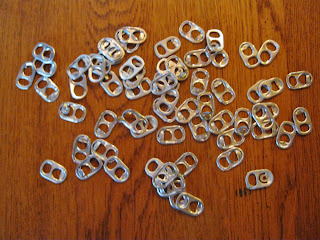 Day 39:  A few nights ago I was hanging out at the Valdez Bar, a dark little bar nestled in a small valley just at the foot of the mountains on the way to the Taos Ski Valley.  They always play country music except when there is an occasional random show, like the punk music they were playing on this particular night.  Everyone was drinking $2 PBR, the cans were skattered all over the place, and as the bar tender began to gather the empty ones, I approached him and asked if he'd mind if I took the tabs first.  As the night went on, he started pulling them off for me as people left the empties on the bar.  It was fun to see him with a row of beer cans lined up, his fingers busy bending the tabs back and forth.  I also had all my friends handing me their tabs.  I was able to collect 64 that night.  Maybe I was a little OCD about it, but I thought it was fun to make collecting tabs my mission on my night out.  I also did a lot of dancing and a little drinking too (Ten Ton Strap really rocks my world).  Using those 64 tabs and about 140 more, I created this belt.  I used some twine that I just had around the house to string them all together. 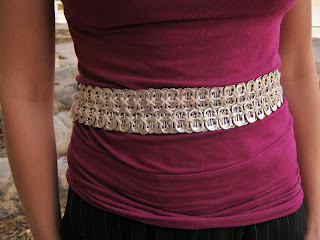