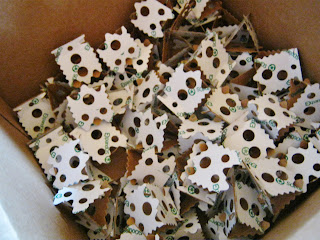 Day 44: It all started with these little swiss cheese looking cardboard pieces that came in a package.  I was immediately thrilled upon seeing these cute little morsels.  I had no idea what I was going to make with them, I just started playing around with them. They fit well together in a circular shape and made a pretty star in the middle.  So I made six of these and then decided to glue them on top of each other to make a vase (for my origami flowers I made on Day 3).  I painted the outside with silver acrylic paint, but left the inside alone, because I wanted some evidence of what it was made from yet thought a solid color on the outside would emphasize both the patterns of the holes and the flowers on display. 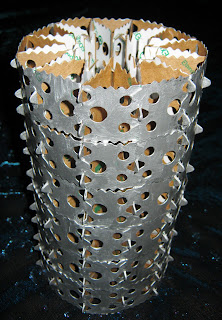 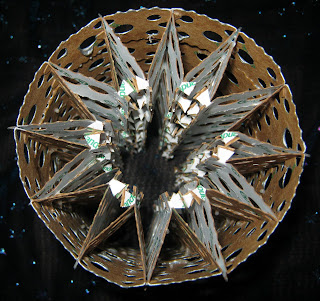 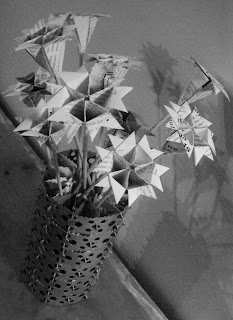 Day 45:  I took a vintage polyester dress and re-designed it.  I should have taken a picture of how it looked originally, but I was so eager to get started I had already started cutting big chunks out of it before this occured to me.  Anyhow, I pretty much just changed it from a ruffly, high necked, stuffy feeling dress into a dress with a V neck in both the front and back.  I used one of the ruffles that I cut away to create a flower.  When I cut a V neck in the back I cut the zipper in half and was going to remember not to pull the zipper pull off all the way before securing the ends again, but of course the first thing I did when I tried it on to see if it was going to work was to pull the zipper pull all the way off.  No big deal, I would just undo the bottom of the zipper and then thread it back on, (that is, if I didn't lose it first).  Which is exactly what I did.  I spent more time looking for that darn zipper pull than on sewing the dress (I shook out my blankets, moved my bed around, pulled out my dresser, shook out all the clothing all over my floor and it was nowhere.  I finally gave up, came home the next day, and there it was right in the middle of my floor where I swear I looked a hundred times.)  At least it was finished in time to wear it for the first day of Spring! 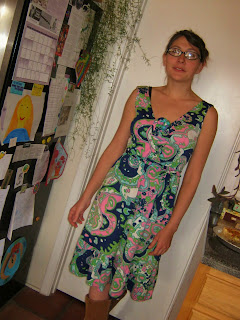 Day 46:  I wanted to make another box from a cereal box, because I realized that it would be perfect for storing my button collection in, and the one I made before wasn't big enough.  I just don't know any one who buys those pure sugar cereals that I grew up on, so I made a box from Triple Berry O's (from Trader Joe's).  It's pretty cute, I think, both the star shape and the pattern of the box.  I lined the bottom of the inside this time around.  Mazi had the idea that it would be cool to store Triple Berry O's inside this box.  I thought that was a pretty funny idea.  My friends could come over, notice my cute little box, and open it up to find something to snack on. 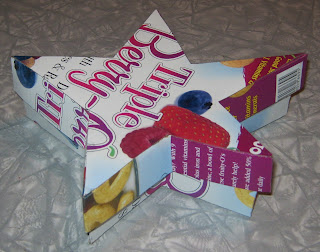 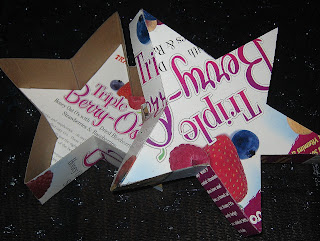