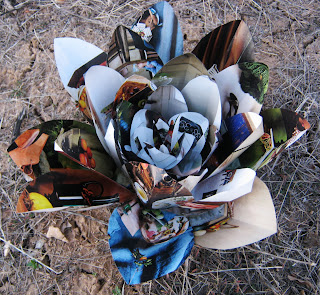 Day 40:  Why, oh why, do I keep making flowers?  Why not little paper piggies, chamelons or monster trucks?  (Oooh, those are some great ideas!)  I think all these flowers are revealing that I need to go in a new direction, break from my patterns.  Or it could also mean that I am meant to perfect the art of flower making.  Either way, I had fun making this lotus flower out of a catalog.  My girlfriend Nicole was hanging out with me while I made this, so we were talking with each other the entire time.  It's nice when my project making can merge with my social life, and the longer I do this, the more it has to, otherwise my friends would never see me.  I am being swallowed by my trash collection.


I took a picture of Mazi holding my lotus to show how big it is.  It appears that it is bringing her some sort of mystical experience, her face lit up in a blissful smile. 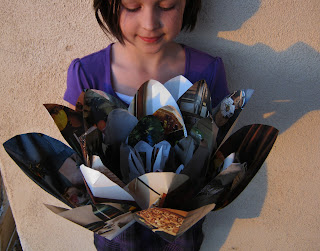 Day 41: Whoops, another flower.  This one I've been planning on making for a while though.  After I made my bicycle tire tube necklace, 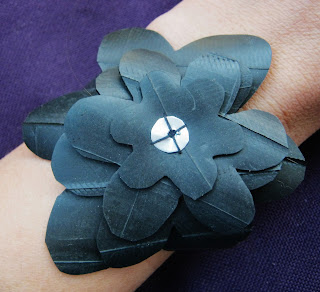 my friend Sara suggested making a bracelet by layering several flowers.  Her other brillant idea was to create a sequin out of a aluminum can for the center of the flower.  It didn't turn out as I had expected.  The tire tubes have a slight curve to them so they wrap around my wrist, and they also lay more flatly against each other than I would have liked.  I tried to create a three dimensional look by putting a few stitches on each layer and gathering them, but it didn't hold and flattened out again when I put the next layer on.  The more I wear it though, the more it grows on me.  I sewed a button on the back side and cut a slit for a button hole, so that it can fit snug.  One of my favorite parts of doing this yearly project is when other people get involved by making suggestions, giving me random things to create with, or just asking, "What are you going to make today?" 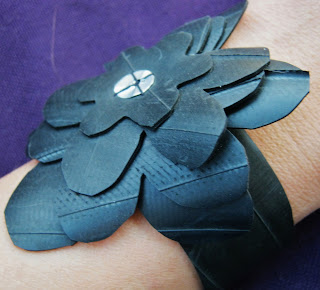