Day 69:  I have been saving foil lids off of yogurts for a while, not knowing what I was going to make from them.  I have an extreme fondness for silver and often paint old picture frames with silver paint.  So I ended using the foil lids to create a silver frame.  Even with that huge stack of them, I didn't have enough to completely cover the frame, so it is not quite finished.  I mostly like how it looks.  From a distance you can't tell what is is made from and just looks like a pretty frame.  Up close, being able to see the foil lids makes me laugh, but I'm not impressed by the effect.  The use of some recycled materials completely fascinates me, other times it works but isn't extraordinary.  This would be one of those times. 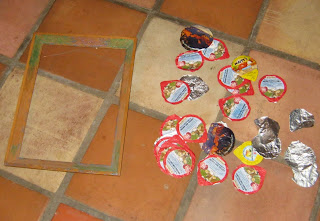 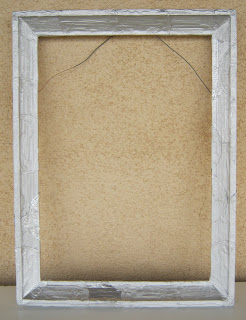 Day 70:  I revisited day 62's project, the piece I made out of various food boxes, that I had the urge to paint blue.  I did indeed paint it blue.  I used three different shades of blue, letting each new layer reveal some of the layer beneath it, including some of the original colors.  Then I also followed the urge to add a splash of words in places where the paint was already light in color.  You can't really see this is the larger picture, so I added a picture of the detail.  I am quite fond of words, especially those that are on the verge of extinction, like zamblanity and ataxaria.  (Of course I couldn't find any of those in the magazine I was cutting from).  I like that the little groups of words could be significant in their meaning or could be random.  I think it adds interest to not know which is the case.  So far, people who have seen both the old and new versions of this piece, like the new version better, myself included. 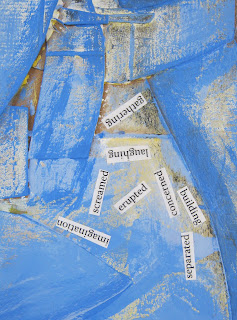 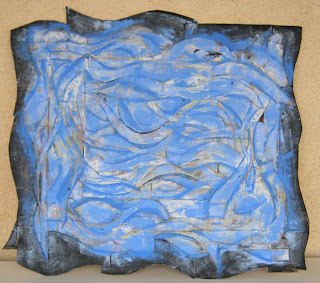