Day 61:  I took a bunch of brown paper home from the store.  It was the packing material from one of our packages.  I knew I wanted to make either a dress or a skirt out of it, but didn't want to think too hard about the design.  I just wanted to dive in, see what it felt like to fold and shape it, and see what came of it.  This is my first trash fashion piece ever, which is really exciting because every year Taos has a Glam Trash Fashion Show, and this year I want to make something for it.  It feels good to be experimenting, and I know that the more I work with my ideas about trash fashion, the more interesting and evolved they will become.  For this one, I basically just folded pleats accross the top to make a waist that would increase into a full skirt.  I put duct tape underneath the spot where I sewed on the buttons and where I made the button holes, so that the paper would be able to hold up.  So, it's easy to take on and off, but no, you can't sit down in it.  I might want to add onto it later.  It would be interesting to make some paper ruffles, or some other sort of embellishment. 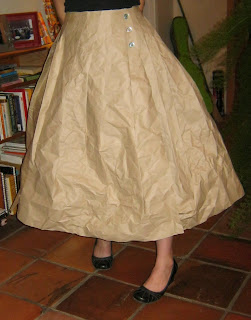 Day 62:  I'm not quite sure what to think of what I made today.  I took a bunch of boxes and cut them into wavy shapes and glued them all together to create a textured piece of art.  Or can you call it art?  I quite like the layers and how the pieces interact with each other, but somehow cut up cereal, pizza, and pie crust boxes all held together with mod podge doesn't fit in with all my education about what art is.  Well, maybe in this world that has so much useless stuff, stuff we just want to throw away and forget about, we need a new definition of art.  Recycled art is not a new idea, but I know that here in Taos, which is considered an art community, you won't walk into one of the galleries here and see anything made out of food boxes.  I do think this particular piece isn't quite what I wanted it to be.  I'm tempted to paint over the whole thing with blue paint.  Here are pictures of both the front and back side. 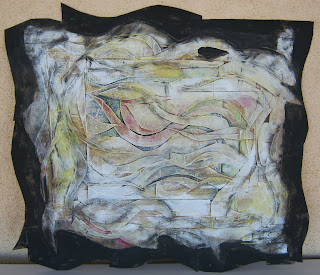 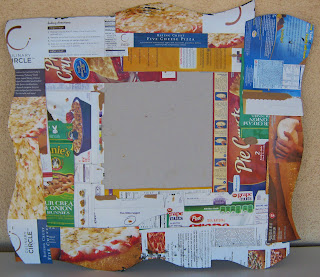 Day 63:  In contrast to yesterday's project, college is a more widely seen and accepted expression of art.  This particular one was one of the most fun I have ever done because it was a collaboration with Richy (my boyfriend who I'm finally spending time with!).  I have never done a piece of art with anyone.  It was one of the most enjoyable times we've had together, because it felt as if I was letting him into a world that I usually only experience by myself.  I enjoyed the ideas that he brought to it, and how it became a piece of art merging our two different styles.  He cut out the big green spider and the white sea creature looking things around the edge.  I created all the tiles of blue, orange and yellow. 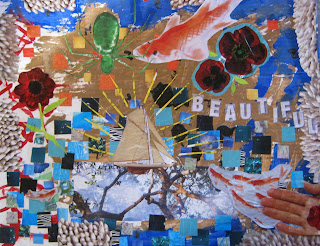