Day 55:  I did it!  I turned the paper weight thing into a beautiful, large vase.  It took aproximately four cereal boxes, two and a half pizza boxes, and one cracker box.  I used a coiling technique to add on each strip, spiraling them higher and higher.  I am impressed with how it took on an even, uniform shape without a whole lot of effort.  I specifically wanted a certain shape for the vase and I acheived it by gluing the strips closer together at the bottom so it took less vertical distance to widen, and farther apart at the top, taking more vertical distance to narrow.  I also switched to mod podge, rather than the regular glue I was using.  It made the process faster because the mod podge dries more quickly than the glue.  I also painted a coat of mod podge on both the inside and the outside, so it has a nice finished surface.  I like how the different shades of the cardboard make it look like I intended to create a pattern, but I was just grabbing any box to work with out of the stack.  It really is quite gigantic, so I'll have to create some monster flowers to display in it. 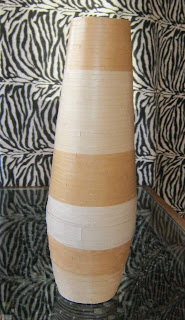 Day 56 and 57:  I have had a few days where the project I start for that day becomes so time consuming that there is no way to finish it in that day.  (Maybe if I wasn't a single mom working between 40 and 50 hours a week it would come more easily).  I have been reevaluating what my goals are and what I really want to get out of this whole 365 business.  I decided that if I start a project one day and end up spending a significant amount of time the next day working on it too, then it counts for the next day's project also.  I'd rather do this than trying to stay up til two in the morning making myself finish something, or making myself finish the project from the day before and complete a new one on top of that.  I do, afterall, have to maintain some sense of sanity.  As long as I spend time every day seriously involved in one of my creations, that's going to have to be okay with me.  The whole point of it for me is to try new things, and to be creating every day.   So it took two days to complete this super sweet purse made from chip bags, candy wrappers and such.  The whole process of collecting all the bags, washing them and cutting them into the rectangles actually began about six months ago before I ever dreamed of doing the 365 project, but the majority of putting it together took place in these two days.  This is the project that has gotton the biggest response from other people.  I will be out working on it, or carrying it around, and no matter where I go, someone always says something positve about it.  This has been really fun, because then I start telling them about this crazy endeavor and my blog.  It's been a good way to share this part of myself as well as make new friends. 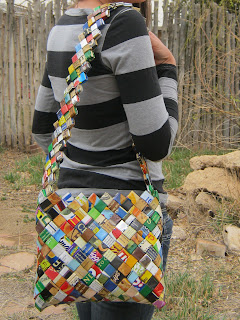 Day 58:  I spent the day trying to get to Albuquerque to visit my boyfriend (who I only see about four days a month which is why I still call myself a "single mom"), but my car broke down on the way.  I ended up in Sante Fe sitting at the mechanics for a couple of hours, spent my entire wad of spending money for the trip on the repair and then headed back up to Taos feeling exhausted, pissed off, broke AND super duper lonely.  Getting creative is enough to remedy all that! As soon as I decided that I would create a collage from old paintings and oil pastel drawings that I had done and was busy cutting and gluing, I forgot about everything else.  That's one thing I love about making something every day, even though at times it drives me crazy, more often it keeps me sane.  Often in the creative process there is chaos, mess, disorder, and it shifts into something beautiful (hopefully) or at least something that has some form and completion.  That in itself is a psychological process and then there are the ways that art becomes a physical representation of something that was previously contained inside you, whether an idea or a feeling.  So there is self affirmation in that.  In many ways being loved by someone gives you the same things that making art can give you.  You receive affirmation by having someone see you and love you for who you are or you can do that for yourself by entering into a space where you allow yourself to unfold and be revealed in what you create, confirming to yourself that what you are is valid and worthwhile. 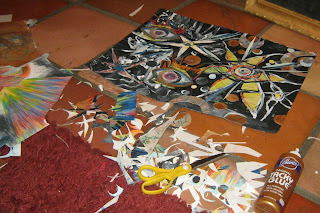 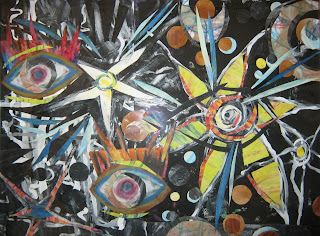