Day 66:  I wanted to make a large flower to go in my large vase, and the first material that came to mind was wire.  I pulled out a bunch of wire I had been holding onto, including a fat copper wire that I have no recollection of where it came from.  I had also saved a couple of those spiral bound notebook wires, one of which had a white plastic coating on it.  I also came accross some scraps of screen, that I decided to use for the petals.  Cutting the petals out of the screen was tricky, it was hard to get all the sharp ends off, so this is a dangerous flower, perhaps a secret weapon against unwanted intruders.  I used the smaller notebook wires to wrap the petals onto the larger wire, and then I found myself wanting to add color, so I wove in scraps of silvery and green material.  I had hoped to fill in the petals more, add some shades of blue, but this is as far as I got. 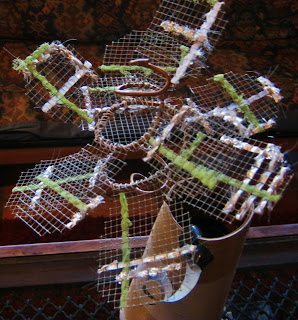 Day 67: Every night before I put my daughter to bed we read.  We just started a new book called "Chasing Vermeer" by Blue Balliett, and illustrated by Brent Helquist (an important fact, since he also amazed me with his illustrations in "The Series of Unfortunate Events," my absolutely favorite children's series written by the wonderfully mysterious Lemony Snicket ).  "Chasing Vermeer" is a mystery novel, with clues given along the way both in the writing and in the illustrations, and related to a set of pentominoes belonging to one of the characters.  I had never heard of pentominoes before, but found out they are a set of shapes each made up of five squares with at least one side touching.  All together there are twelve possible shapes that five squares can make.  These twelve shapes can then fit together to make thousands of rectangles, and mathematicians have messed around with these for years keeping track of all the possibilities.  So, inspired by this book, I decided to make a set of pentominoes, cutting them out of a cereal box.  Even though there are thousands of possibilities, making even one rectangle is not so easy.  I sat up playing with them before heading off to bed.  First thing in the morning, as Mazi was eating her cereal, she starting messing around with them.  We have only been able to make a smaller rectangle so far, using six pieces.  I guess we're right on track, cause that's all the character in the book has come up with so far and we are having fun with them. 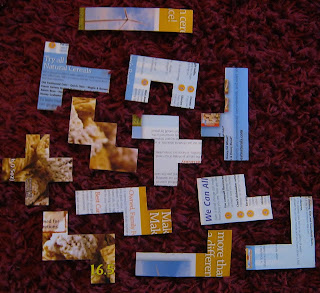 Day 68:  I try not to mess around too much doing things other than work when I'm at the store, but it's good to keep my self happy and take a little break here and there.  So while making miniature magazine bags that we use for the small items (the bags are quite fun to make too), I made a magazine flower.  Now, one of the things that I absolutely love about working at the store (and there are a lot of things to love), is that it is a sweet little community of shops where I know many of the shop owners and their employees by name, and love seeing them every time I work and getting to know them.  I always enjoy a quick chat with the girls at the coffee shop accross from the shop and often don't make coffee at home, just so I will go in there on my way to work.  I gave this flower to one of the coffee shop girls named Shalis, cause she's the one who is always there when I work, and I think she is one of the nicest people in the world.  It's fun to make something for someone just cause you like them so much. 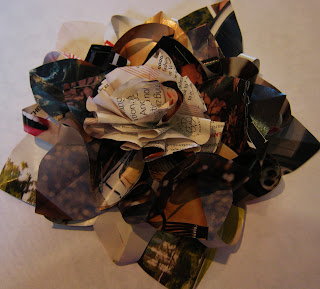