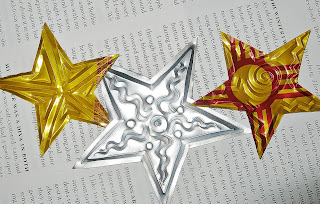 Day 20:  After an exhausting day, I went home to watch my favorite movie, "A Town Called Panic,"  which is an animated film about a horse, a cowboy, and an indian who all look like those little plastic figures kids play with.  I have watched this movie at least a dozen times and it always cracks me up, especially the farmer who yells instead of talks, and it is in French! While watching, I drank one of my favorite beers, Happy Camper IPA, which is made in Sante Fe and has the New Mexian zia on it.  After I finished my beer, I cut out these stars and decorated them by pressing a design into them with a ball point pen.  It looks especially cool when you press the design from both sides, because then the lines from each direction emphasize each other.  An enjoyable evening for sure. 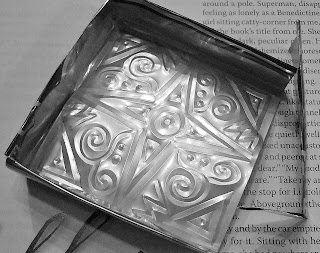 Day 21:  Another long day, ending with another beer!  I spent the day in Albuquerque visiting my friend Diane, who is in the hospital.  It was very beautiful to be able to sit by her side holding her hand and talking to her even though she was unconscious.  She had a large group of friends who were there to see her, and we spent the day crying together, singing songs, and even laughing.  Even with so much going on in my life and being away from home in another city, I still wanted to do my project for the day.  I had been wanting to try to make a box from an aluminum can, a project I found on instructables.com.  It seemed easy enough to make, all I needed was a can, some sissors, and a pen.  It seemed like the perfect project for the day, but when I was folding it together, it broke along the score mark.  I guess I pressed too hard when making the lines.  I think it could work with some more practice and I think the parts that did stay together looked great.  I really like the look of the design drawn into the can.  It seems like something I will try again at some point.  I was just happy to know that life can get hard, but that doesn't stop me! 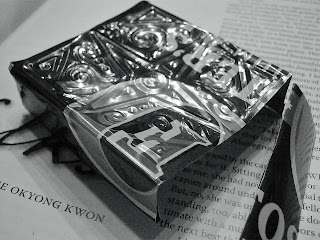