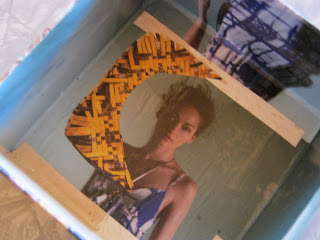 Day 11: Realizing that I am starting to have little piles of things I am collecting all over the house, I decided that I needed to make some boxes to keep things neat and organized. I had saved a gift box from several months ago that was torn on the surface because of the gift wrapping that was taped to it.  I covered the lid of it with an Anthropologie magazine.  I find their catalogs artistic and beautiful, but it's not like I'm EVER going to buy something from them. 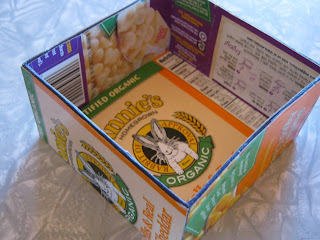 Day 12: I decorated the other half of the gift box.  I like this half of the box much better than the one above.  It's more unexpected to see pieces of Mac and Cheese boxes reassembled into another box.  I've done tons of magazine collages, but not something like this before.  And yes, I let my daughter Mazi eat a lot of Mac and Cheese, more than I probably should.  I guess that's why one of her nick names is Maz-a-roni.  At least I'm giving her the organic stuff.
Posted by Ren Geertsen at 11:01 AM