Day 109:  Okay, so, this is not too exciting, my magazine paper snowflake.  It's not even one of the most interesting snowflakes I've ever made, but I've never made one out of magazine paper before.  I like that part of it at least. 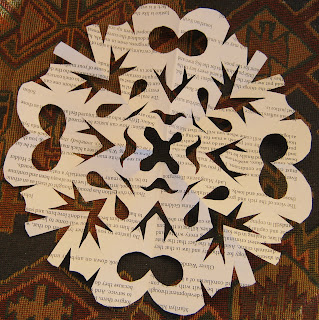 Day 110:  I decorated a lid from a jar of nacho cheese.  This will also be filled with resin at some point and then I'll glue a magnet on the back.  This project is a little artistic encouragement for myself on my path of singlehood. 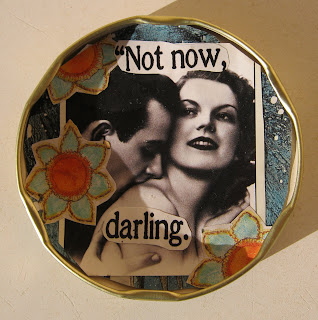 Day 111 and 112: I started saving my receipts for all kinds of things back in March, thinking I would make something out of them eventually.  I decided on making a bowl out of them by rolling each one into a circle and then joining the circles together.  Once again, my materials didn't go as far as I expected, and once again, I plan on adding to this project as time goes on.  This is made up of about 63 receipts so far. (I keep losing track while counting, because the circles aren't in straight rows.  Reminds me of trying to count a roly-poly's legs yesterday while it was crawling accross my hand.  It was hard to keep track of them while they were in motion, but I think it had seven pairs of legs.)  I used a stainless steel bowl as the surface for gluing these together so it could take on the same shape.  It is just barely starting to curve up the sides.  The bowl worked great though, the paper didn't stick to it at all.  I like how this turned out and I think it has the potential to be quite stunning when finished. 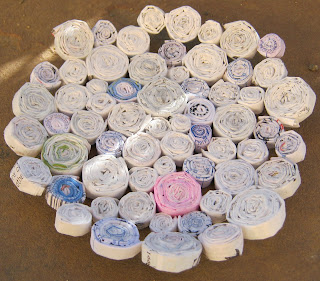 Day 113: I found a beautiful branch when I was out walking a few weeks ago, but I was far from my car and didn't want to carry it with me a couple of miles up the road.  I remembered it when I was on the same road yesterday, and I pulled over and put it in my trunk.  I had seen a tree in a magazine that was made out of black and white paper that I thought was very beautiful.  It looked like it was made of wire or some other base, but I thought, why not just cover an actual branch with paper? I like the irony of covering wood with something made out of wood.  I was very engaged in this project. It was time consuming, but refreshing, something I find true about creating trees in general.  It's like an external manifestation of the spirit of growth inside me. At midnight, I looked at the clock and told myself, "I'm almost done, I can finish," but it was close to 1:00 when I finally passed out.  It was like a good book I couldn't put down.  Here I am looking a little gothic (unintentionally), dressed in black holding my white branch: 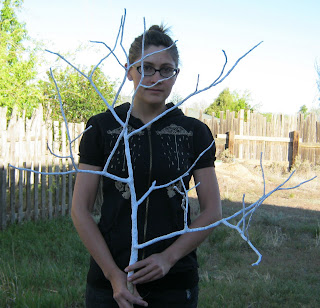 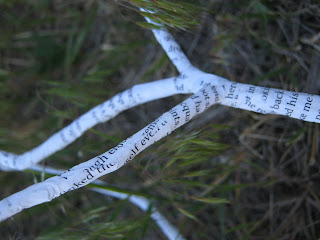