Day 101: I spent a few hours over at my friend Will's house pouring the resin into the bottle caps.  The job to pour the resin fell on me, because I was the only one not too scared of the side effects of inhaling the stuff.  If I were to do it again, I would definitely wear a better mask (rather than doing it bandit style with a bandana covering half my face), becasue I really don't wanna cause any trouble for my brain cells.  Anyhow I don't have a finished picture of the bottle caps.  Last I saw them, they were laying accross the work table in Will's garage waiting to harden.  So I did a mini project later on when I got home.  I revisited a couple of my earlier origami projects.  I made a mini magazine flower that fits into my gift box from Day 99 (it's a little bigger than a quarter), and I added on to one of my black and white magazine flowers way back from the first week of this project (I think it looks neat with another color in the middle). 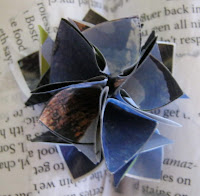 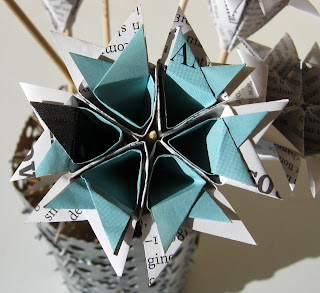 Day 102: I had been wanting to do a portrait of a friend using pointilism, and using circles punched out of magazine paper as the points.  I wanted to just try out the technique to see if it was possible or completely annoying to work with those tiny little dots.  It ended up being completely annoying, but mostly because my hole punch is dull and every circle I punched would hang onto the paper and I'd have to tear them off.  So when I reached my limit with the hole punching, I added on some squares and called it good.  Not that the finished result is in any way something I adore or want to keep (it reminds me of something I would have made in third grade back in the 80's), but it's my creation, my experimentation, my art, none the less. Art is a process of trying and trying, expressing and expressing, until finally something works, breaks through, becomes what you've always wanted to show the world you could do. 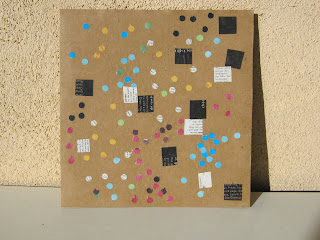 Day 103:  I had the idea that I would take this chair and paint it and add some sort of magazine paper design to it like I did with the yellow cabinet.  The problem is, I like it too much just plain green. (Well, the green really isn't plain is it? It almost screams at ya.)  Having an undecorated chair also leaves the door open for another awesome pillow project in the future.  This chair is one of several that were in my house as a kid, from the time I was born.  It might seem a shame to cover up the wood with a coat of paint, but psychologically it can feel good to take something from your child hood and transform it. 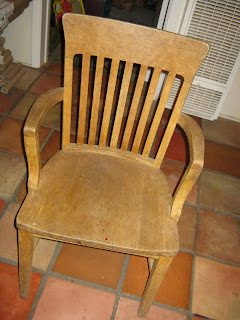 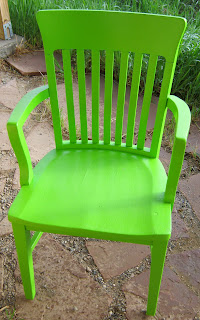 Day 104:  I made itsy bitsy magazine paper boxes.  Some magazine paper is just so beautiful, it's just begging to be made into something else.  These pages are from an Adbuster's magazine (quite a work of art in itself) and are exceptionally sweet as little boxes.  The smallest one is about an inch long on each side, and the words are a quote from Ghandi about non-violent resistance. 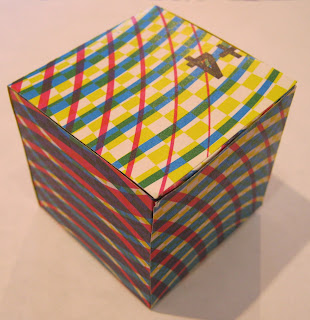 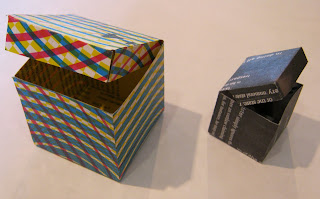 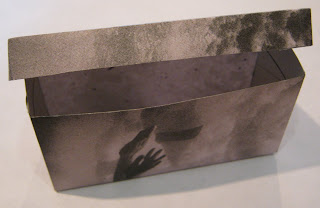 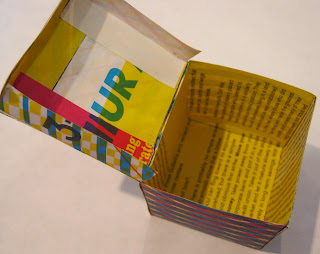 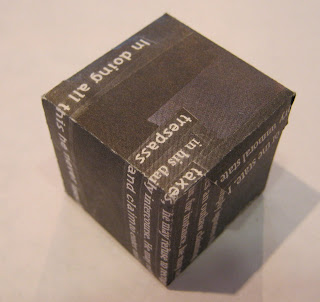 (and now a little side note... The woman I work for, Sara Basehart, left me a little gift yesterday to celebrate reaching day 100.  She gave me an awesome pair of scissors, which I really needed because all of my scissors are exceptionally dull.  I am easily touched by gestures like this, so there I am at work, discovering the scissors with a little note attached, and then my eyes get all watery...)
Posted by Ren Geertsen at 9:28 AM